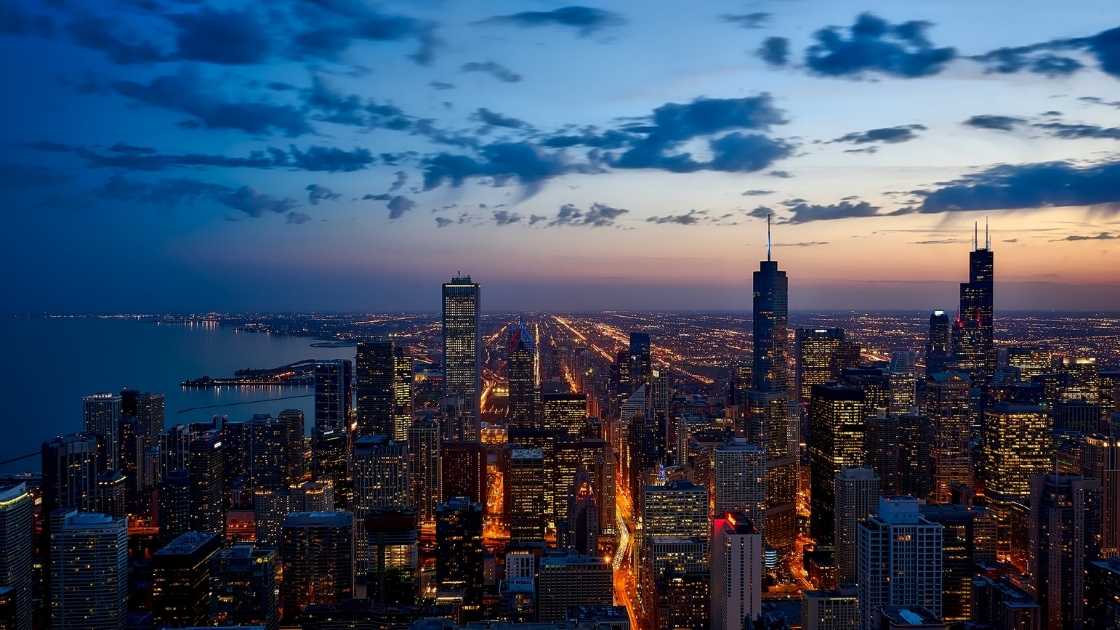 Hindu Temples near Chicago aren’t something like Polar beers in Desert! The cultural heritage of Chicago is as enriched as anything else in the city.

Chicago has an extensive history that dates back to 1778, when it was founded by Jean Baptiste Point du Sable. Chicago has a lot of historical sites to visit.

But when you’re done with the museums, the art galleries, and the architecture, there’s one place that may be your favourite – the Chicago Temples.

So, here’s the list of Hindu temples near Chicago that are most visited and are genuinely good to visit over and over again –

10 Hindu Temples Near Chicago That You Shouldn’t Skip On

Chicago, as we all know, is the fastest moving city. And in this drastic pace, only temples could be the rescue to the peace.

The beauty, architecture, infrastructure and vibes altogether at the Temples are something that no one can miss. Especially if you are an Indian, you couldn’t miss visiting a Temple.

While visiting the BAPS Shri Swaminarayan Mandir, you would appreciate and dive deep into an architectural masterpiece that was built in the style of traditional Hindu temples.

The location is peaceful and gives the vibes of harmony. You won’t feel like rushing back to the city too soon. Experience the slow pace with a peaceful mind right here in the middle of the city.

Because Ganesh worship is mandatory before every beginning, the Temple is architectured simple yet profound. This is one of the best Hindu temples near Chicago.

The Ganesha Temple celebrates Ganesha Chaturthi for 10 days which is one of the prominent festivals in India, with great enthusiasm.

The Balaji Temple is a Hindu temple in Aurora, Colorado. The Temple serves as a place of worship for many Hindus from all over the world.

The Balaji Temple is spacious and usually preferred to visit during evenings so you can stroll around and sit having your prasad till late evening.

The Temple is giant, peaceful and worth a visit!

Quang Minh Buddhist Temple is a Buddhist temple in Chicago.

Buddhist temples are often referred to as the heart of a community. They serve as places for meditation, reflection, and community gatherings. The Temple also hosts cultural events and educational programs that teach about Vietnamese culture and traditions.

The Temple is clean and pleasant to visit during festive seasons as there are programs organized for the community.

As any other Hindu Temple could be, the Hindu Temple in Lemont, Chicago, is a vast, giant and traditional space full of architecture, scriptures and glory of the heritage.

The outside walls of the Temple are decorated with ornamental carvings and inscriptions. The carvings depict various scenes from Hindu mythology, such as Vishnu’s incarnation as Krishna and Shiva’s marriage to Parvati.

The Bahai Temple is a Bahai place of worship in Wilmette, Chicago. It is the second Bahai Temple built in the United States and one of only two such temples in North America.

The Temple is also one of the 8 continental temples. This Temple is built for the continent of North America as a whole and not Chicago.

Hence, the heritage value of the Temple is leveraged.

The Chicago Temple is a prominent landmark of the city. The building has been listed on the National Register of Historic Places and is one of the oldest Temples in the United States.

And as every city has its own Temple, the Chicago temple is one such attraction and must visit place for everyone in the city.

The ISKCON Chicago is a Hindu temple in Chicago. It has been serving the spiritual needs of thousands of people ever since it is founded.

The ISKCON is a Hare Krishna community located in the city’s heart. The community is one of the largest in the world.

The Buddhist Temple of Chicago is a place for people who are looking to find peace and solace. Here, you can meditate, learn about Buddhism, and participate in community activities.

If you are visiting a Temple to meditate and seek a peaceful place for the same, the Buddist Temple, Chicago, will meet your expectations.

Radhey Shyam Temple in Chicago is a spacious and peaceful temple. You will find a golden dome to the Temple, which looks marvellous. It also has a veranda where you can sit and appreciate the beauty of the Temple.

The Temple is also the perfect place to hang out with your buddy, where you both can enjoy the silence and beauty around.

So these are some Top Hindu Temples near Chicago. And this is not it! There are many Temples inside and outside Chicago which are amazingly built and are visited by many.

The temples are the most popular and famous places of worship in the world. They are used by different religions, and they are also visited by millions of people every day.

There are also community spaces and cultural hubs held at different places in Chicago.

Also read: 15 Best Waterfalls In Rhode Island That Are Worth Visiting